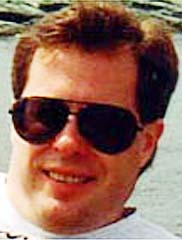 How do you write a testimonial about someone you do not know? How do you do justice to their life, and their untimely death?

I didn't know David P. Kovalcin. Until the day I registered to participate in the 2996 tribute, his name was just that. A name among all the others who perished on 9/11.

Now truthfully, the devastation of that fateful event is not a memory I carry on a daily basis. Yeah, sure, we fly the American flag on the front of my home. Yeah, sure, I earnestly support our troops wherever they may be. And yeah, sure, I understand the price of freedom is sometimes very high.

And I don't want to do that now.

When I first signed up for this, I did so, because as the victim of another historical national disaster, albeit a survivor, I wanted to help ensure that this tragedy, this event, this date, September 11, 2001, was never forgotten.

The whole purpose of this 2996 tribute is to make sure no one forgets. Everyone "remember(s) the Alamo" don't they?

But I don't just want to remember their deaths. What I would like to do is to remind folks of the LIVES of those who perished that day. Celebrate their contributions, however many, however few. And make it more personal. If not for you, it will be for me.

So right now, I want to share and remember and honor the life of David P. Kovalcin.

Again, when I started, I didn't know David. But in reading what I could find about him, I realized, surprisingly enough, we have some things in common.

Hmmm. You know what I think about coincidences.

You see, David was only 42 when he died. I'm now 42. We graduated from college the same year, '85. We both own/ed at least one dog. And at the time, I, like him, had some fish. I think pet people are good people.

We both have at least one daughter, (he had two, Rebecca and Marina, now approximately ages 9 and 6.) And even more interesting, his wife is named Elizabeth, a significant name for me.... I was supposed to name my daughter Elizabeth.

Oh and I have a nephew named David. The parallels amaze me.

And something else.... we both like/d to draw on steamy bathroom mirrors - pictures or messages that would "reappear" for the next bather. From what I gleaned, his wife carries on that habit. 'Ghost writings', the news reports said. We call them the same thing in our house.

David was on the American Airlines, Flight 11. That's the flight that left Boston for L.A. and the first used in the September 11 attacks. This is the plane that was deliberately flown into the North Tower of the World Trade Center in New York City.

I can recall that I had just dropped my daughter off at school and was only blocks away when I heard the news on the radio about the first plane crash. At that moment I was tempted to turn around and check her out of school and spend the day with her. Holding her. Being with her. Loving her.

I cried the whole way to work. "OMG" "How horrible." "Those poor poor people." And the more I thought about them and their families and their losses, the more I wanted just to hold MY child. And be with MY loved ones.

I can only imagine.... well no, honestly, I can't even begin to imagine the thoughts running through the minds of the passengers on those planes. Or how worried their families must be - wondering if that was their flight. Their plane. Their personal disaster.

Although I can believe that most passengers were thinking about their most cherished loved ones. From all reports, David was a family man. I'm sure that his wife and girls were in his last thoughts. And perhaps prayers.

I've read many posts about the victims of 9/11. And of course, they say many favorable things about them. People would write wonderfully sentimental messages about their friends, co-workers, family. Reminiscing, fondly recalling things from the past.

I wonder if those who died, knew how important their contributions were. How meaningful their relationships were. How much their presence touched the lives of those left behind.

If anything, I've learned that we need to let the living know how much we appreciate and love them. While they are still here to hear it. The compliments. The applause. The tributes.

I think David was like that. I read that he wrote a note to his family before he left for that fateful trip. He told them how much he would miss them. I think David would echo my sentiments here.

I'm now sorry that I didn't actually know David P. Kovalcin. But now, I will always remember. There's a life behind the name. It's become more personal for me.

And David Kovalcin, it's been an honor to have met you.

Blogroll Me! Who Links Here

As the owner of this blog, I assume no responsibility for any errors, or inaccuracies, in its content or judgement. I am not a doctor or lawyer, nor do I portray one on TV. Void where prohibited. Use only as directed. Batteries not included. Caution: May Be Hazardous to Your Health. Accessories sold separately. Not to be used by children under 3. May cause drowsiness. No animals were injured in the making of this website. Do not operate heavy machinery. No shirt, No shoes, No service. Do not overinflate. Stay back 300 feet. Recommended by 9 out of 10 dentists who chew gum. Caution: Makes wide turns. Keep out of reach of children. For external use only. Parental guidance suggested. Do not use during last three months of pregnancy. Objects may be smaller than they appear. Simulated picture. Sold for the prevention of disease only. Artificially flavored. All rights reserved. Not for human consumption. Stops at all railroad crossings. Contents under pressure. Best when used by expiration date. We reserve the right to refuse service to anyone. No smoking. Prices may vary. Configuration subject to change. Plus tax, title and license. Unauthorized duplication is prohibited. Monitor sold separately. Found to be only 99.9% effective as a contraceptive. Plus shipping and handling. Do not freeze. Your mileage may vary. Close cover before striking. Please rewind. Not used for purpose intended. Adults only. This tag is to be removed only by consumer. No carryouts. You agree to these Terms and Conditions by using this site. Available for a limited time only at participating locations. Not responsible for lost or stolen articles. Discontinue if redness or swelling occurs. Not animal tested. FDA approved. Unattended children will be given candy and a free puppy. Contents may settle during shipping. Stir occasionally. Do not discontinue use unless directed by your physician. Keep out. Do not use if seal is broken. For chronic continued constipation consult your doctor. Store at room temperature. Results may vary. Shake before using. Flammable. Patent pending. Any resemblance to real persons, living or dead, is purely coincidental. Due to the graphic content, parental discretion is advised.

devoted followers have worshiped at my lotus feet